click here to print a print-friendly version of the newsletter 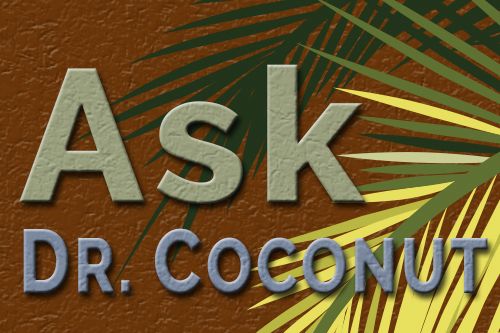 Will Eating Coconut Oil Raise My Cholesterol?
This is the most often asked question I receive regarding coconut oil. This is a legitimate concern because we have been conditioned to believe that all saturated fats raise cholesterol.  Learn more... 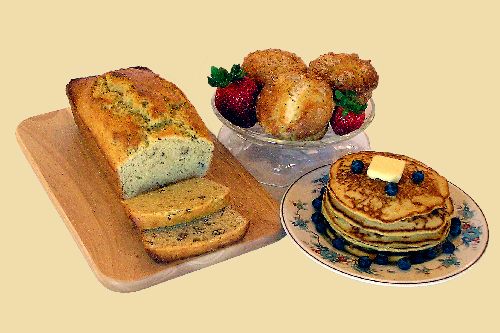 I love wheat and all the things that are made from it—cakes, cookies, pies, pizza, pasta, pancakes, muffins, the list goes on and on. Wheat products are the most popular foods in our diet. Learn more... 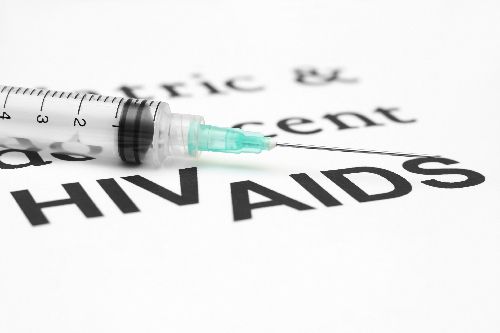 In coming out of the closet to tell his story Tony, 38, lends hope to thousands of AIDS sufferers worldwide. Learn more...

I love wheat and all the things that are made from it—cakes, cookies, pies, pizza, pasta, pancakes, muffins, the list goes on and on. Wheat products are the most popular foods in our American diet. Wheat, in one form or another, is eaten in just about every meal.

If you are allergic to wheat or sensitive to gluten, you won’t want to use standard bread recipes. In that case, my new book Cooking with Coconut Flour: A Delicious Low-Carb, Gluten-Free Alternative to Wheat will be of great value to you. All of the recipes in this book are completely wheat free, using only coconut flour.

No other flours are needed. Recipes include breads, muffins, cakes, cookies, crackers, pies, and even main dishes like chicken pot pie and chicken and dumpling stew. You will love the German chocolate cake and the blueberry muffins. If you’re concerned about sugar, you don’t need to worry: all sweet recipes include low sugar versions. These foods taste so good you would never know they are made with coconut flour rather than wheat. 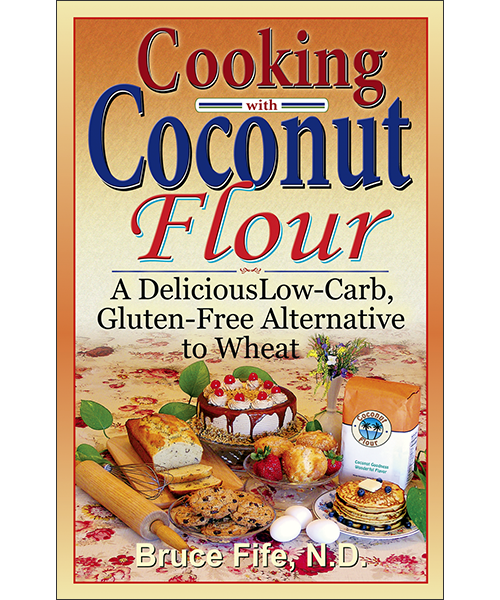 top of the page

In coming out of the closet to tell his story, Tony, 38, lends hope to thousands of AIDS sufferers worldwide. "You don’t know how hard it is for one to have an illness that others find repulsive...I had wanted to shut myself inside my room and just wait for my time to die," Tony told symposium participants.
Tony was a guest speaker at a symposium titled "Why Coconut Cures", held in Manila, Philippines, May14, 2005. The symposium was headed by Dr. Bruce Fife, who was also the keynote speaker. Other participants included cardiologist Conrado Dayrit, dermatologist Vermen Verallo-Rowell, biochemist Fabian Dayrit, and Senator Jamby Madrigal.
Tony’s testimony, along with those of others who had experienced dramatic recoveries from various ailments, provided first-hand accounts of the use of coconut oil in healing chronic health problems described by symposium participants.
Beneath the sunglasses that he wore, his eyes were moist, not in self-pity but in triumph. A cap and long sleeves hid a body scarred by a disease Tony contracted while working in the Middle East in the 1990s. Coming home in 2002, Tony was devastated to learn that he was infected by the human immunodeficiency virus (HIV). As the disease progressed, the pain he endured came not only from the infections ravaging his body but from the shame the disease had brought him. He felt like giving up.
Drugs, which he could barely afford, could not deliver him from the dreaded virus and the other infections that were slowly draining away his life. His body was covered with fungal infections and oozing sores accompanied by a chronic pneumonia infection that caused a persistent cough. He knew he was losing the battle as each day symptoms grew worse; he found it increasingly more difficult to function and was completely incapable of working.
Unable to afford medication, he sought help from the Department of Health. He was referred to Dr. Conrado Dayrit, the author of the first clinical study on the healing effects of coconut oil on HIV-infected patients, which was conducted at the San Lazaro hospital in the Philippines. By this time Tony was diagnosed with full-blown AIDS and had little hope for recovery.
Dr. Dayrit secured a steady supply of coconut oil for Tony’s use, free of charge. He was instructed to apply the oil to his skin two to three times a day and consume six tablespoonfuls daily without fail.
The program worked miracles. Each time Tony went to the hospital for his periodic blood tests, his viral load decreased. Tony said that when he told hospital doctors what he was taking, they could not believe that a simple dietary oil was killing the virus better than all the modern drugs of medical science.
Just nine months after his initial visit with Dr. Dayrit, Tony appeared before the audience at the symposium for all to witness his remarkable recovery. The infections that once racked his body were gone. Even HIV was no longer detectable. What used to be skin sores all over his body were now just fading scars. His life energy had been restored enough for him to give an eloquent testimony of how something as simple and natural as coconut oil could halt this deadly disease.
Evidence for coconut oil’s effect on HIV was first discovered back in the 1980s when researchers learned that medium chain fatty acids—the kind found in coconut oil—possessed powerful antiviral properties capable of destroying the AIDS virus. Since then, numerous anecdotal accounts of HIV patients using coconut and coconut oil to overcome their condition circulated in the AIDS community. Even basketball legend Magic Johnson, who retired from the NBA because he was HIV positive, is reportedly credited with using coconut on his road to recovery.
The first clinical study using coconut on HIV patients was reported by Conrado Dayrit in 1999. In this study HIV-infected individuals were given 3.5 tablespoons of coconut oil daily. No other treatment was used. Six months later 60% of the participants showed noticeable improvement.
This was the first study to demonstrate that coconut oil does have an antiviral effect in vivo and could be used to treat HIV-infected individuals. Dr. Dayrit is now heading a larger study in Africa using coconut oil in the treatment of HIV.
The symposium "Why Coconut Cures" was based on Dr. Bruce Fife’s recently published book Coconut Cures. Philippine president Macapagal-Arroyo recognized Dr. Fife’s relentless advocacy in educating people about the healing properties of coconut.
Coconut Cures is currently available at most health food stores in the US. It is also available directly from the publisher at www.piccadillybooks.com or from www.amazon.com. ■
top of the page 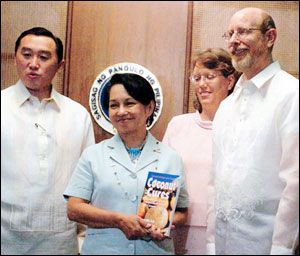